Explanatory Notes regarding the Roosevelt Address

It is desirable, therefore, to quote here a modern writing which correctly reflects the views of the Framers and Founders as to the initial instrument’s exclusion of the fields of power from Federal control and, in addition, takes into account all amendments to the present period.

A 1930 writing which fills this need is available; and, in addition, it is an excellent and concise discussion of the traditional American philosophy and system of government regarding especially the nature and importance of decentralization of power ("States Rights") as a mainstay of the security of the people’s liberties. The Constitution has not been amended since 1930 to increase Federal power, so this writing in effect speaks as of today with regard to the extent of Federal powers; indeed, they have since decreased by repeal of the 18th ("Prohibition") Amendment by adoption in 1933 of the 21st Amendment. This 1930 writing is cited for the further reason that it couched in simple terms and presents only ideas which were then common knowledge and accepted truths among the American people - even among Youth with a normal high-school education for that period - as well as among the people through the generations from 1787 to 1930. The writing is cited not because it expressed anything new, or any original thinking of its author but, on the contrary, because it does not do so. Its special usefulness and value stems from the fact that it merely re-stated the traditional view as always understood and supported up to 1930 by all competent scholars and authorities - including the three Branches of the Federal government, especially the Supreme Court - as well as by leaders and the American people in general. This widespread understanding was such in 1930 that, if the valedictorian of the graduating class of a college, or even of a high school, had then made this address as the one usual on such an occasion, the audience would justly have applauded on the ground that there was nothing in it but long-accepted truths so well known that it merely evidenced the young orator’s being soundly and reasonably well informed regarding the elementary simplicities of the traditional American philosophy and system of constitutionally limited and decentralized power and its fundamental importance to the safety of the American people’s God-given, unalienable rights. 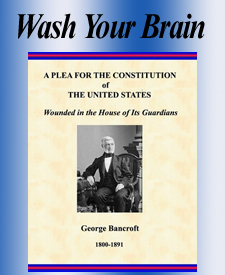