Alexander Hamilton's February 23, 1791, opinion as to the constitutionality of the Bank of the United States.

(Given while he was Secretary of the Treasury under the First Administration, George Washington, President, Thomas Jefferson, Secretary of State, and Edmund Randolph, Attorney-General.)

THE Secretary of the Treasury having perused with attention the papers containing the opinions of the Secretary of State and the Attorney-General concerning the constitutionality of the bill for establishing a national bank, proceeds, according to the order of the President, to submit the reasons which have induced him to entertain a different opinion.

It will naturally have been anticipated, that in performing this task he would feel uncommon solicitude. Personal considerations alone, arising from the reflection that the measure originated with him, would be sufficient to produce it. The sense which he has manifested of the great importance of such an institution to the successful administration of the department under his particular care, and an expectation of serious ill consequences to result from a failure of the measure, do not permit him to be without anxiety on public accounts. But the chief solicitude arises from a firm persuasion, that principles of construction like those espoused by the Secretary of State and the Attorney-General would be fatal to the just and indispensable authority of the United States.

In entering upon the argument, it ought to be premised that the objections of the Secretary of State and the Attorney-General are founded on a general denial of the authority of the United States to erect corporations. The latter, indeed, expressly admits, that if there be anything in the bill which is not warranted by the Constitution, it is the clause of incorporation.

Now it appears to the Secretary of the Treasury that this general principle is inherent in the very definition of government, and essential to every step of the progress to be made by that of the United States, namely: That every power vested in a government is in its nature sovereign, and includes, by force of the term, a right to employ all the means requisite and fairly applicable to the attainment of the ends of such power, and which are not precluded by restrictions and exceptions specified in the Constitution, or not immoral, or not contrary to the essential ends of political society.

This principle, in its application to government in general, would be admitted as an axiom; and it will be incumbent upon those who may incline to deny it, to prove a distinction, and to show that a rule which, in the general system of things, is essential to the preservation of the social order, is inapplicable to the United States.

The circumstance that the powers of sovereignty are in this country divided between the National and State governments, does not afford the distinction required. It does not follow from this, that each of the portion of powers delegated to the one or to the other, is not sovereign with regard to its proper objects. It will only follow from it, that each has sovereign power as to certain things, and not as to other things. To deny that the Government of the United States has sovereign power, as to its declared purposes and trusts, because its power does not extend to all cases, would be equally to deny that the State governments have sovereign power in any case, because their power does not extend to every case. The tenth section of the first article of the Constitution exhibits a long list of very important things which they may not do. And thus the United States would furnish the singular spectacle of a political society without sovereignty, or of a people governed, without government.

If it would be necessary to bring proof to a proposition so clear, as that which affirms that the powers of the Federal Government, as to its objects, were sovereign, there is a clause of its Constitution which would be decisive. It is that which declares that the Constitution, and the laws of the United States made in pursuance of it, and all treaties made, or which shall be made, under their authority, shall be the supreme law of the land. The power which can create the supreme law of the land in any case, is doubtless sovereign as to such case.

This general and indisputable principle puts at once an end to the abstract question, whether the United States have power to erect a corporation; that is to say, to give a legal or artificial capacity to one or more persons, distinct from the natural. For it is unquestionably incident to sovereign power to erect corporations, and consequently to that of the United States, in relation to the objects intrusted to the management of the government. The difference is this: where the authority of the government is general, it can create corporations in all cases; where it is confined to certain branches of legislation, it can create corporations only in those cases.

Here, then, as far as concerns the reasonings of the Secretary of State and the Attorney-General, the affirmative of the constitutionality of the bill might be permitted to rest. It will occur to the President, that the principle here advanced has been untouched by either of them.

For a more complete elucidation of the point, nevertheless, the arguments which they had used against the power of the government to erect corporations, however foreign they are to the great and fundamental rule which has been stated, shall be particularly examined. And after showing that they do not tend to impair its force, it shall also be shown that the power of incorporation, incident to the government in certain cases, does fairly extend to the particular case which is the object of the bill.

The main proposition here laid down, in its true signification, is not to be questioned. It is nothing more than a consequence of this republican maxim, that all government is a delegation of power. But how much is delegated in each case is a question of fact, to be made out by fair reasoning and construction, upon the particular provisions of the Constitution, taking as guides the general principles and general ends of governments.

It is not denied that there are implied, as well as express powers, and that the former are as effectually delegated as the latter. And for the sake of accuracy it shall be mentioned that there is another class of powers, which may be properly denominated resulting powers. It will not be doubted that if the United States should make a conquest of any of the territories of its neighbors, they would possess sovereign jurisdiction over the conquered territory. This would be rather a result from the whole mass of the powers of the government, and from the nature of political society, than a consequence of either of the powers specially enumerated…

The proposed bank is to consist of an association of persons, for the purpose of creating a joint capital, to be employed chiefly and essentially in loans. So far the object is not only lawful, but it is the mere exercise of a right which the law allows to every individual. The Bank of New York, which is not incorporated, is an example of such an association. The bill proposes, in addition, that the government shall become a joint proprietor in this undertaking, and that it shall permit the bills of the company, payable on demand, to be receivable in its revenues; and stipulates that it shall not grant privileges, similar to those which are to be allowed to this company, to any others. All this is incontrovertibly within the compass of the discretion of the government. The only question is, whether it has a right to incorporate this company, in order to enable it the more effectually to accomplish ends which are in themselves lawful.

To establish such a right, it remains to show the relation of such an institution to one or more of the specified powers of the government. Accordingly it is affirmed that it has a relation, more or less direct, to the power of collecting taxes, to that of borrowing money, to that of regulating trade between the States, and to those of raising and maintaining fleets and armies. To the two former the relation may be said to be immediate; and in the last place it will be argued, that it is clearly within the provision which authorizes the making of all needful rules and regulations concerning the property of the United States, as the same has been practiced upon by the government…

The constitutionality of all this would not admit of a question, and yet it would amount to the institution of a bank, with a view to the more convenient collection of taxes. For the simplest and most precise idea of a bank is, a deposit of coin, or other property, as a fund for circulating a credit upon it, which is to answer the purpose of money. That such an arrangement would be equivalent to the establishment of a bank, would become obvious, if the place where the fund to be set apart was kept should be made a receptacle of the moneys of all other persons who should incline to deposit them there for safekeeping; and would become still more so, if the officers charged with the direction of the fund were authorized to make discounts at the usual rate of interest, upon good security. To deny the power of the government to add these ingredients to the plan, would be to refine away all government… 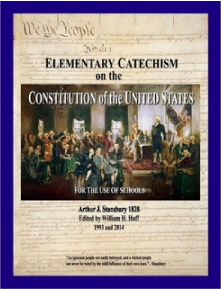